The Camino remains one of the most popular pilgrimages in the world, drawing hundreds of thousands every year.

Included in these numbers are many distinguished people including members of Royal Houses, the Church, powerful politicians and Hollywood movie stars. Let’s take a look at some of the most famous people who have walked the Camino de Santiago!

The former President of Ireland walked 115km of the French Way from Sarria to Santiago with her husband, Martin, and friends during her second term in April 2009. She then returned to Arás an Uachtaráin in time to host a reception for Ireland’s Grand Slam-winning rugby team. 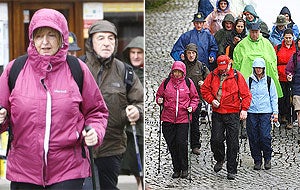 The famous actress, singer and dancer walked the entire French Way in 1994, at the age of 60. The Oscar winner walked 20 miles a day (taking 10 hours) for 30 days in solitude. The star whose movies include Sweet Charity and Terms of Endearment wrote a spiritual book about her journey; The Camino: A Journey of the Spirit. She also spoke about her experience with Oprah Winfrey on Super Soul Sunday. 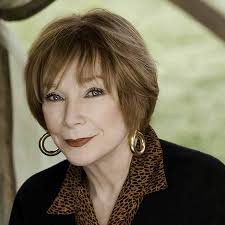 Angela Merkel, Chancellor of Germany, walked a 6km section of the French Way from O Pedrouzo with former Spanish Prime Minister, Mariano Rajoy, during a state visit to Santiago in August 2014. After the walk, she visited the Cathedral de Santiago de Compostela and embraced the famous statue of St. James. Merkel is a regular hiker, and spends many of her holidays walking in the Alps… so it wouldn’t surprise anyone if she returned to walk the full Camino in the near future. 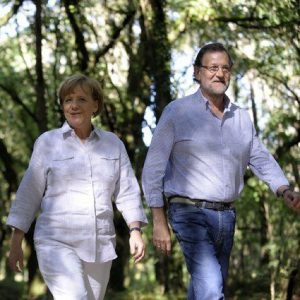 Pope John Paul II was the first Pope to walk the Camino. He visited Santiago on two occasions; November 1982 during Santiago’s Holy Year and August 1989. On his second visit, he said Mass on the hill ‘Monte do Gozo’ in front of 400,000 young people to commemorate World Youth Day. He then walked the final 5km to the Cathedral in Santiago. 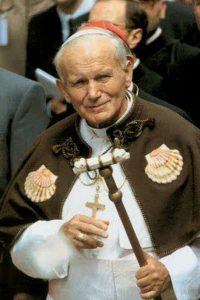 In 2008, the renowned physicist Stephen Hawking visited Santiago to receive the prestigious Fonseca prize from the University of Santiago de Compostela. While there he completed a symbolic section of the Camino de Santiago in his wheelchair and afterwards visited “the end of the world”, Finisterre, where there is now a plaque in his honour. 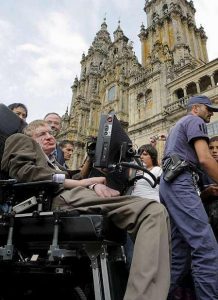 In 2009, Martin Sheen walked sections of the French Way with his son Emilio Estevez while filming the popular film ‘The Way’. In Martin Sheen words, the idea of this film came about in 2003 while they drove the Camino (at this time he was unable to walk it due to time constraints)…..

“My father was born just outside of Santiago, so I grew up knowing about it. I always had that fantasy that I would walk the Camino de Santiago. In the summer of ’03 when we were on a break from ‘The West Wing,’ and Emilio’s son Taylor was working for me as a young assistant. We were [driving] on the Camino and we stopped at a little restaurant along the way, and Taylor met his future wife — they’re married now. Her mother’s name is Miracle (in Spanish), and I thought “Hmm … there’s something going on here.” I came home and had some explaining to do about why his son wasn’t with me. Emilio picked it up from there and had his own journey with it”.

To read more about this film from Martin and Emilio, click here.

7) King and Queen of Belgium

For the previous three years, the King and Queen of Belgium have walked different sections of the French Way during Easter. In April of this year, King Philippe, Queen Mathilde, their children Crown Princess Elisabeth, Prince Gabriel, Prince Emmanuel, Princess Eleonore and close family friends walked from Burgos through the Palencia province. One of Hollywood living legends, Anthony Quinn, walked part of the Camino in 1999. He was not exactly a pilgrim when on the Camino but a member of the cast of a TV series Camino de Santiago. Filming took place along the French Way near Pamplona, which gave the actor the opportunity to learn more about it during his “pilgrimage”. 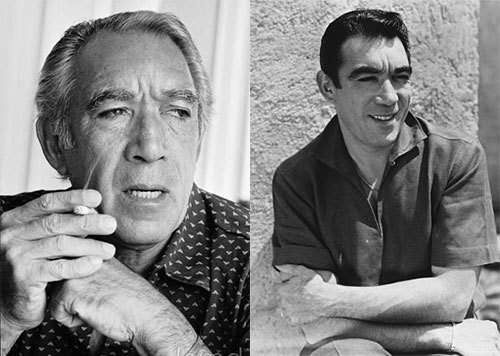 Former Hollywood Bratpacker actor, Andrew McCarthy’s life changed forever while walking the Camino in 2012. The experience inspired him to travel and write, which led to his career as an author and publishing the highly acclaimed book ‘The Longest Way Home’. To read more about his inspiring Camino journey, click here. 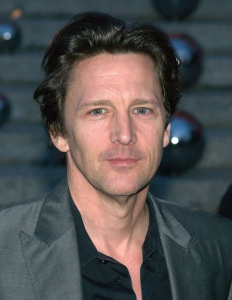 The daughter of George W Bush walked the Camino from Lugo to Santiago with her friends in 2004, at the age of 22, to celebrate graduating from University. 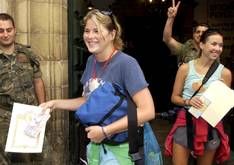 St Francis of Assisi, an Italian friar, was a celebrity of his time and made the journey from Italy to Santiago between 1213 and 1215. At that time, pilgrims had to walk both from their home to Santiago and back, so this explains why it took so long! Also, he founded several monasteries along the way including St. Francis Church and Convent in Santiago. 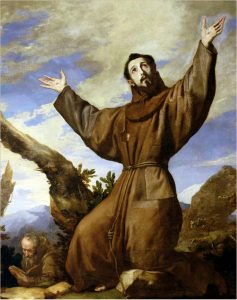 If you are interested in following in the footsteps of either these celebrities or your ancient European ancestors, who more than likely made this pilgrimage to Santiago, contact us here.