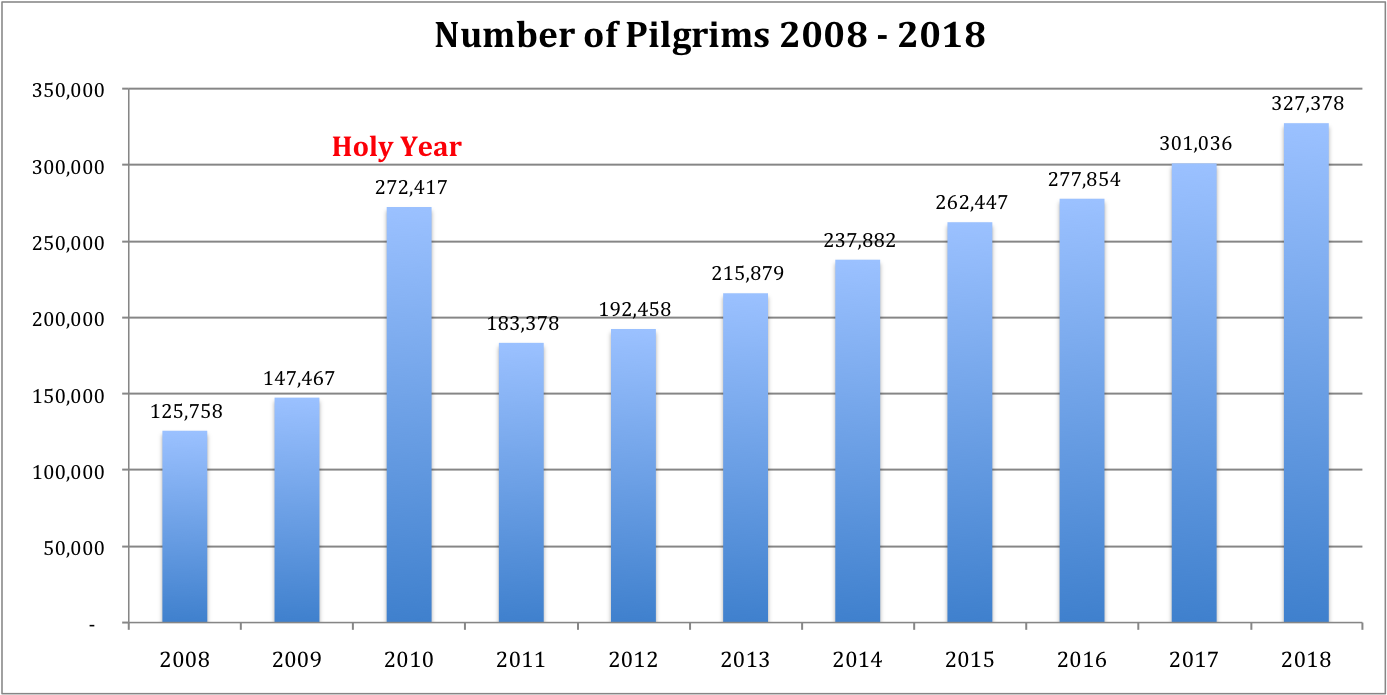 Once again the numbers show the popularity of the Camino among the Irish pilgrims. A record number of 7,548 Irish pilgrims arrived in Santiago in 2018, an annual growth of 13.6%, which outperforms the overall 8.7% growth from the previous year. Looking at the last 10 years, there has been an astonishing 392% growth in Irish pilgrims walking the Camino!

So why are so many Irish walking the Camino?

First of all, the 2010 American film “The Way”, whose main character is played by Martin Sheen, has helped to make it more popular in Ireland since its release in 2010. Martin Sheen has strong Irish connections; his mother is from Borrisokane, Co. Tipperary, he studied English literature in Galway University and he is very good friends with the Irish President Michael D Higgins. This film has inspired many Irish people to go on their own Camino journey of adventure and self-discovery.

Over the last five years, there has been a surge of information about the Camino in different forms of Irish media providing historical and cultural information, inspiring stories and personal experiences. There have been many TV documentaries on RTE and TG4 (Ronan on the Camino 2013, The Walk of Life 2015, Camino Voyage 2017; which was subsequently released as a film in December 2018), Irish radio shows broadcast either on the Camino or about the Camino (RTE1 Mooney Show and Today FM) and regular Camino related articles in national newspapers.

This has created a greater awareness about the Camino in northern Spain and has helped to change the perception that it is primarily a religious trip. Today, less people walk the Camino for religious reasons with growing numbers walking for cultural, health and spiritual reasons.

A second factor is the variety of low cost, direct flights from Dublin to northern Spain, where the majority of the Camino routes start. There are daily flights during the months of June to September and flights three times a week in April, May and October making it more accessible to Irish people.

The third factor is the shift towards more cultural holidays in Ireland in recent years. This shift has been more pronounced since the 2008 Financial Crisis. As many people lost their jobs, they had an opportunity to question the way they had been living and spending during the boom years. People pressed paused, re-assed their priorities and sought out personal experiences like the Camino that they had overlooked before the crisis.

For those who have yet to experienced the Camino, we would only say “Do It”! It is such an unique personal experience that one week on the Camino is worth more than thousands of pages in travel guides or hours of TV documentaries. Do not wait for others to tell you about their Camino, get your boots ready and make your own one!