2020 has been a year like no other on the Camino due to the global pandemic. We do not have statistics from 1348 but one can only imagine the impact of the Black Death on the Camino in terms of pilgrim numbers. We do however have the statistics for 2020 and the numbers speak for themselves.

According to the Pilgrim Office in Santiago de Compostela, 53,893 pilgrims walked the Camino in 2020, representing an astonishing 84% drop compared to the 347,585 pilgrims who arrived in 2019. Please note these figures only include pilgrims who collected a ‘Compostela’ or Certificate of Completion in Santiago, they do not account for pilgrims who did not finish in Santiago or those who finished in Santiago but did not collect a Compostela.

This figure represents the lowest number of pilgrims since statistics were first published in 2004. Between 2005 – 2019, excluding the Holy Year of 2010 and the following year 2011, the number of pilgrims walking the Camino has grown at a rate fo 9.5% per annum. 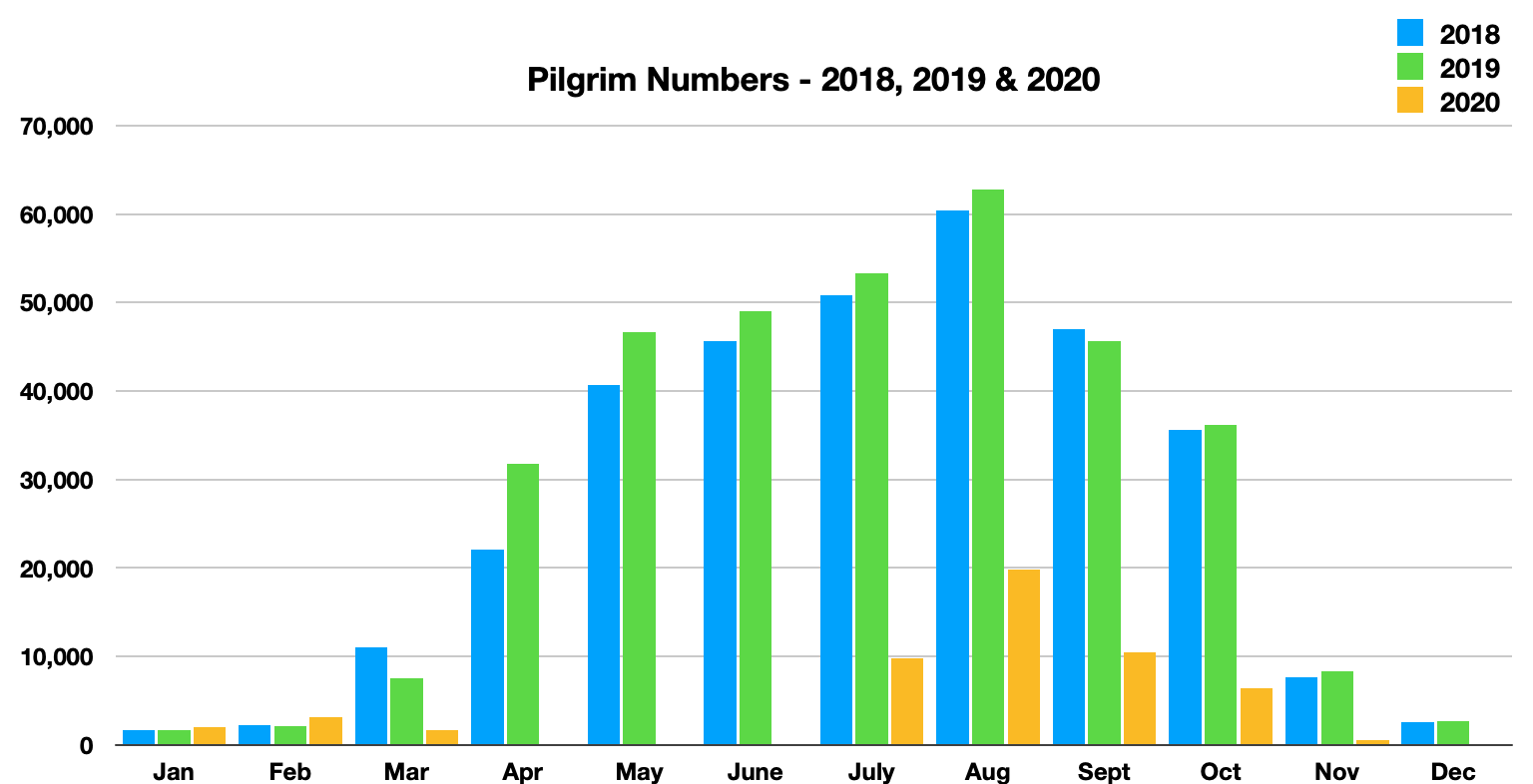 Considering all the travel restrictions you may think this is a fairly high number. The majority of these pilgrims were Spanish (69%), who were allowed to travel this year with the exception of the lockdown period from the 15th March to the 24th June.

The total number of foreign pilgrims for 2020 was 16,885 compared with 201,229 in 2019, before the pandemic, representing a year on year contraction of 92%! The largest numbers came from Portugal, France (where travelling to Spain could be done overland), Germany and Italy.

The drop in numbers was specially sharp for English speaking countries which traditionally have very strong links to the Camino. The numbers of pilgrims from the UK dropped 94% from 9,132 in 2019 to just 573 in 2020. Pilgrims were allowed to travel by the UK government during three weeks in July which may explain why it had the lowest decrease within the English speaking countries.

The number of Irish pilgrims decreased by 96% from 6,807 to just 247! Half of the Irish pilgrims obtained their Compostela before Covid19 restrictions between January and March 15th. The sharpest fall was for pilgrims travelling from the United Sates, with a decrease of 98% from 20,652 in 2019 to just 438 for the entire year of 2020.

While 2021 has started off with more lockdowns, overall we believe it will be a more positive year due to the rollout of the BioNTech and Pfizer vaccine and the Holy Year on the Camino de Santiago. It will be the the first Holy Year on the Camino since 2010. After eleven long years, pilgrims will be able to walk the Camino on this special year and experience the nature and excitement of the ancient route after a difficult year spent mainly in lockdown.